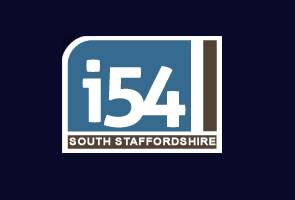 A unique and award-winning business development project by three councils has seen a major milestone reached with construction of a new motorway junction for the site set to begin.

The creation of the dedicated motorway junction, the only project of its kind in the UK as a joint council venture, will open up i54 South Staffordshire directly onto the national motorway network to make operations more effective for all businesses located there. Work will begin in the middle of March.

The joint venture has seen Wolverhampton City and Staffordshire County Councils invest £40m in the motorway junction and other infrastructure on the site, to be repaid back through future business rates collected by South Staffordshire Council. The investment will lead to the creation of hundreds of skilled manufacturing jobs with more investment to follow – a top priority for all three councils. This week, the project was recognised nationally by the Local Government Information Unit (LGiU), winning the Partnership Achievement of the Year.

Contractors Birse Civils, which has already started advanced works removing trees and bushes next to the M54, is expected to begin the main construction works during the week beginning March 18. The planned construction will include the building of a new road bridge over the M54 motorway to the west of the existing junction 2 (A449). The existing junction slip roads will be extended and new roundabouts constructed to allow full access to the site.

The brand new junction is expected to be completed towards the end of 2014 and will involve a number of overnight motorway closures, although these will be kept to a minimum. A temporary 50mph speed restriction will be in place throughout the works and narrow lane running will be in operation. Lane closures on the slip roads to the west side of junction 2 of the M54 will also be in place.

Staffordshire County Council leader Philip Atkins said: “Normally business sites are built near existing motorway junctions but here we are turning this approach on its head, creating a junction to solely serve this development site. Making i54 South Staffordshire as accessible as possible means it has become one of the major draws for businesses to locate here and for those considering making it their base in the future it offers many opportunities.
“Construction of the junction is a significant milestone in the development of the site and it is rewarding to see it reach this stage. We knew it would take considerable investment and work to make this a leading centre for business and connectivity is an integral part of this.”

Councillor Roger Lawrence, leader of Wolverhampton City Council, said: “Ensuring the transport infrastructure is right for a major development such as this is vital and this investment will strengthen i54 South Staffordshire’s links with the rest of the country.
“This is a unique project and is helping to boost job creation and economic growth regionally. With work at Jaguar Land Rover’s new engine plant progressing well and both Moog aerospace and Eurofins already operating, the site has been put firmly on the map.”

Councillor Brian Edwards, leader of South Staffordshire Council added: “Instead of taking the site to the motorway – we’re taking the country’s motorway network directly to the site. This project is truly unique and shows the long term commitment of all three councils to boosting the local economy and investing in jobs and prosperity.”

Extensive ground works and infrastructure installation has already been completed across the site. A 240-tonne accommodation bridge over the M54 has also been put in place. All tree removal work is being done before to the bird nesting season.